This item is available in full to subscribers.

We have recently launched a new and improved website. To continue reading, you will need to either log into your subscriber account, or purchase a new subscription.

If you are a current print subscriber, you can set up a free website account by clicking here.

Otherwise, click here to view your options for subscribing.

“During the overnight hours we have responded to multiple homes in the Oakland Beach area of the city that reported finding suspicious packages with racially charged messages found on front lawns,” Warwick Police wrote on their Facebook page Tuesday. “We are actively investigating this. If you have any information or have video of one of these incidents please call us 401-468-4200.” 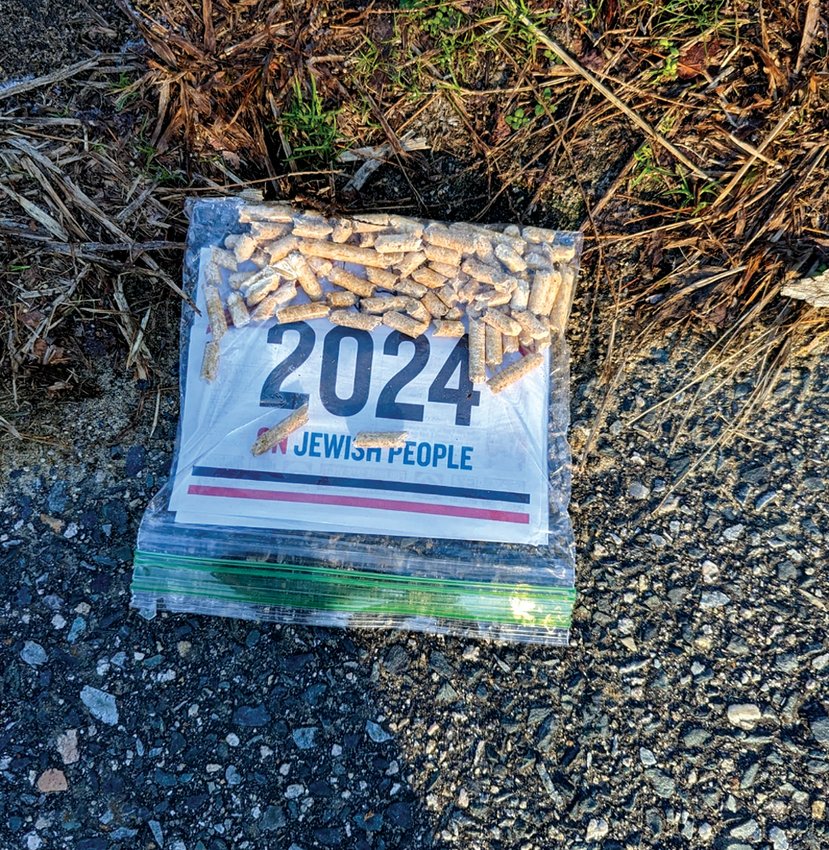 “This morning, my neighbors in Warwick woke up to find these disgusting fliers distributed throughout the area,” Langevin posted. “Antisemitism has no place in our community, and those found responsible must be held accountable. I commend (Warwick PD) for moving quickly to investigate.”

Tuesday afternoon Warwick Police posted an update on their investigation.

“Regarding our active investigation of suspicious packages found in the Oakland Beach section of Warwick,” police wrote, “detectives are looking to identify the owner of the below vehicle. Please contact us with any information regarding this case (401-468-4200).”

Some of the packages contained small pellets; initially, neighbors feared the pellets were some sort of poison, but were later determined to be wood pellets.

“At this time all packages that have been turned over to the Warwick Police Department have not contained any poisonous substances,” Warwick Police said.

Police said the vehicle was traveling 45 miles per hour in a 35 mph zone. A quick registration check told police the plates were canceled, and belonged on a white 2004 Ford. Police initiated a traffic stop.

Holmes approached the vehicle and identified the driver as Deven Ribeiro, 23, of 141 Reservoir Ave., Providence. Ribeiro allegedly told police he purchased the vehicle “a few months ago from a Facebook (ad) and had not registered it,” Holmes wrote in the arrest report.

“When asked Ribeiro stated he had not had the vehicle insured yet and could not provide me with proof of insurance,” Holmes wrote.

Ribeiro was arrested and transported to police headquarters. He allegedly told police that he paid cash for the vehicle and bought it from a man in Woonsocket.

“Ribeiro stated he was provided a bill of sale and paid cash,” Holmes wrote. “Ribeiro stated all his correspondence with the male was over Facebook, and the entire interaction and sale (of) the vehicle took place during the month of August.”

He told police that he had been driving the Lexus since August and “was unaware the vehicle was stolen.”

Ribeiro was ultimately charged with Possession of Stolen Vehicle and issued a District Court summons for Driving with Suspended License (second offense). He also received a speeding ticket.

On Wednesday morning, Warwick Police issued a grim reminder to the city’s residents.

“Today marks six months since Charlotte Lester, 45, of Warwick, disappeared from the Apponaug section of the city,” they wrote on the WPD Facebook page. “Charlotte’s disappearance is an active investigation and we are asking the public to share Charlotte’s photo and encourage anyone with credible information to come forward.”

Lester was last seen the evening of Monday, May 16, in the area of Arnold’s Neck Drive and Staples Avenue, according to police.

On May 18, her beloved dog Chloe was found abandoned in the area of Elmwood Avenue, police said.

“Lester’s vehicle, a Red 2006 Toyota Tacoma, was discovered days later in the parking lot of Kent Hospital, 455 Toll Gate Road, Warwick,” according to police. “Family and friends have not seen or heard from her since. If you, or someone you know, has information regarding the location of Charlotte Lester, or information related to her disappearance, please contact the Warwick Police Detective Division at 401-468-4200.”

Other items that may interest you